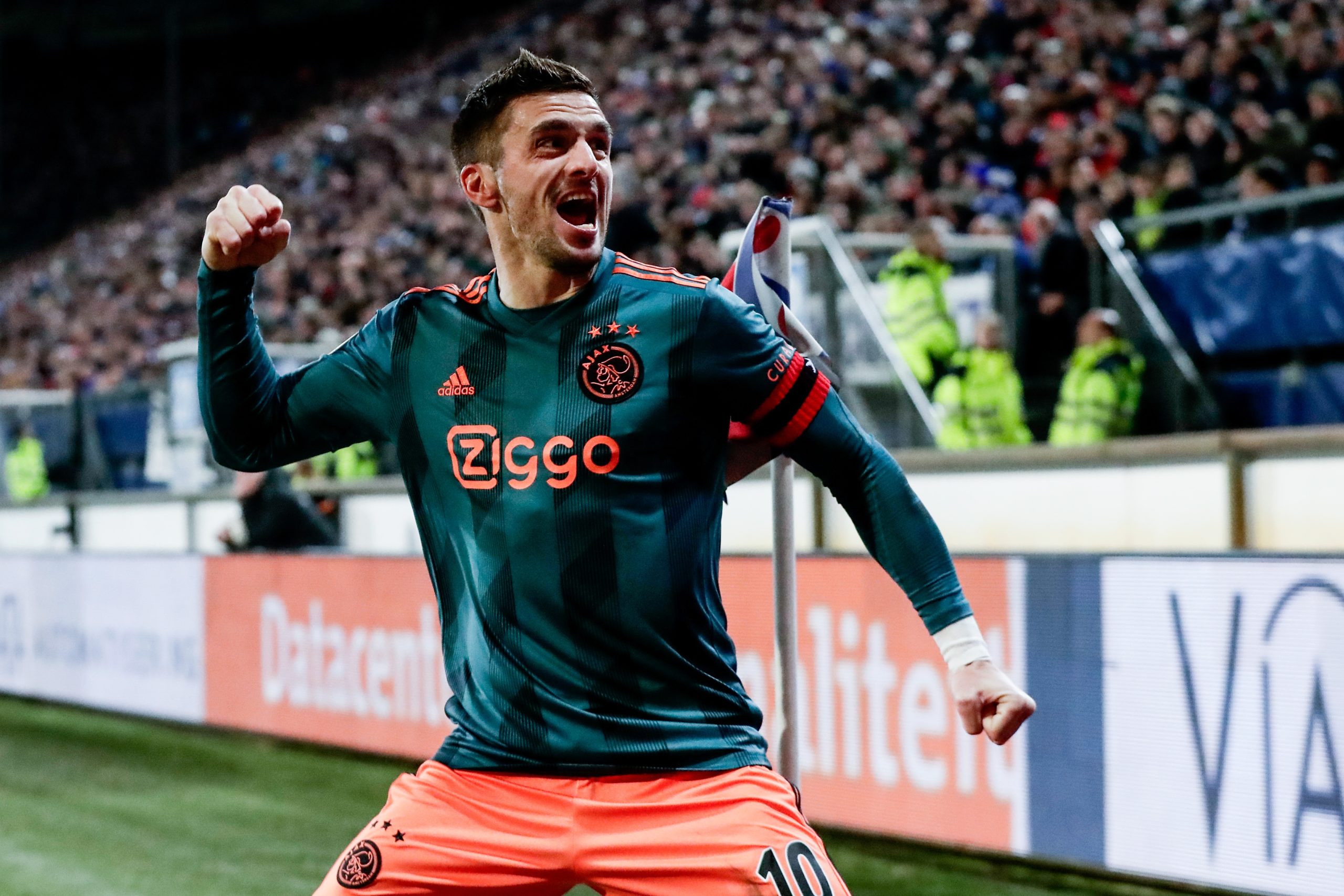 Ajax successfully defended their position at the top of the Eredivisie table on Saturday night by winning three points away at SC Heerenveen. After the very disappointing run of defeats and eliminations over the course of the past few weeks, this latest result comes as a much-needed relief. Ajax was visibly struggling, yet again, in both offense and defense, and though they still do not resemble the solid team of 2019, they managed to secure a victory by scoring thrice in six minutes. Heerenveen 1 – 3 Ajax.

Around 30.000 spectators took their seats in the Abe Lenstra Stadion to see both Ajax and Heerenveen get off to a very slow start. Ajax was on the ball for much of the first twenty minutes, yet they couldn’t think of anything good to do with it. Heerenveen defended and waited, obviously not in any rush. A rare highlight of the opening stages occurred when Hicham Faik curled a free-kick just past the near post of Onana’s goal. The free-kick had been given away by Jurriën Timber, who usually captains Jong Ajax but surprisingly started next to Daley Blind in central defense. Timber had a bad start to a decent debut.

Ajax were making all the same mistakes they made against Getafe, AZ, FC Utrecht, etc, and they were lucky not to concede a goal before half-time. Martínez and Blind were caught sleeping by Chidera Ejuke on two separate occasions, and André Onana saved his team twice. Ajax were clearly unable to contain Ejuke, a prolific dribbler, which was underlined when Ejuke slipped through the back-line again and handed striker Halilovic a chance you simply can’t miss. Halilovic miraculously missed, however, and Ajax got away once again. Tadić and Traoré were taking shots at the opposite goal in the meantime, but they were denied by keeper Bednarek.

Ajax wrapped up the first half feeling unhappy. Captain Dušan Tadić had an uncharacteristic outburst of extreme anger towards Sergiño Dest just before the break. Tadić and the team as a whole were clearly dealing with a lot of frustration and pressure to perform. After a brief cooling-down in the dressing room, Ajax came back looking stronger. Though Heerenveen forced Onana to perform another save right after the break, Ajax landed their first punch soon after. And then a second, and a third.

Things just suddenly seemed to fall into place for Ajax in the small period between the 57th and the 63rd minute. The first goal involved a certain degree of luck. The ball suddenly appeared at Tadić’ feet after the Heerenveen defenders clumsily mishandled it and the Serbian tucked it in the goal. The hosts didn’t react well to that set-back, suddenly looking shaky. Ajax finally regained a grain of self-confidence and quickly scored two more goals. Dušan Tadić bagged his second of the night by scoring a tap-in following a corner kick. Quincy Promes made it three with a little help from Heerenveen player Floranus, Ziyech, Traoré, and the crossbar.

At that point, Ajax may have gotten a little too confident. Too many players strayed too far up the field looking for goal number four, all the while giving away too much space in defense. Mitchell van Bergen scored goal number four by curling the ball neatly passed Onana, who missed out on another clean sheet. Ajax never really put themselves at risk of a come-back, however. Heerenveen lacked the firepower to score more than the one goal. Ajax thought they had scored another goal near the end of the match through Nico Tagliafico, but the party was called off for offside. The final whistle soon sounded.

After being briefly overtaken by AZ, Ajax are now once again leaders of the Eredivisie based on goal differential. One would hope that this good result will lift some of the pressure off of Ajax’ shoulders, and infuse some more positivity into the team ahead of a string of difficult matches that await in the coming days.