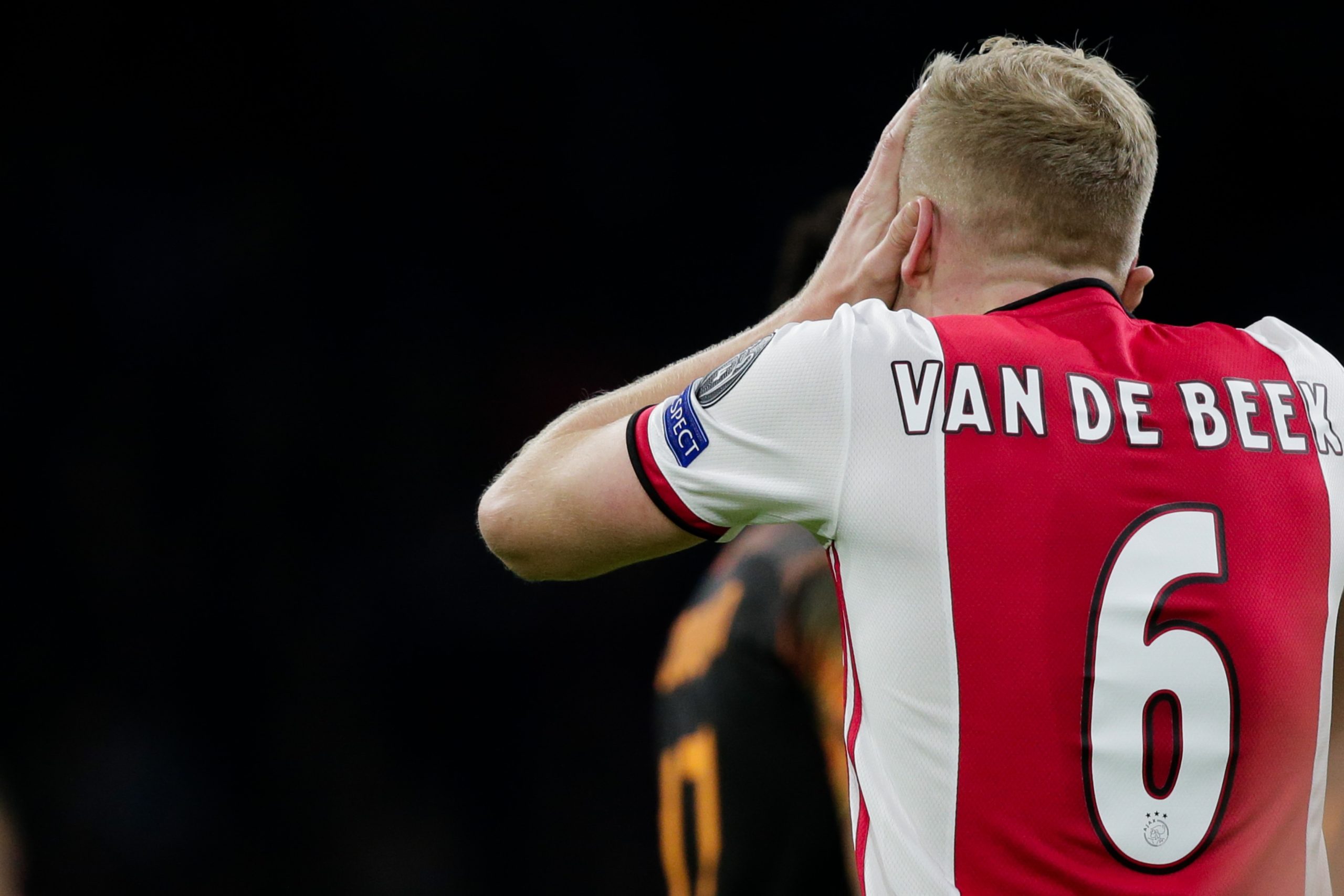 The NOS did a recap on 2019 with Ajax-midfielder Donny van de Beek. Three main subjects; the 34th title, Real Madrid and the National Team. All About Ajax has translated the article for English readers.

The first subject that gets discussed is the 34th championship, which Ajax secured in May of 2019. It is a special number for Ajax, but especially for van de Beek. Immediately thoughts go to Abdelhak ‘Appie’ Nouri, who made his debut in the first team wearing number 34, but due to severe and permanent brain damage from cardiac arrest can never play football again.

Number 34. The whole year that played a big part.
“We really wanted to achieve it, that title. Looking back on that season I think we deserved it, too. Ajax hadn’t been champions for a while. And then that 34th. It was so loaded. We all played for Abdelhak. This championship was so much looked forward to.”

How important was it for you personally?
“This was really high on my list, naturally. I knew that Abdelhak had chosen number 34 especially to win the 34th title with Ajax. He is the kind of person that thinks about those things, he told me.

Nouri’s father and brother were also present at the title celebrations.
“That was beautiful. I have a very close connection with the family. I talk a lot with them, especially his brother Mohammed. I’m in contact with him every day, I see him a lot, too. He plays for my old amateur team now.”

Real Madrid also played a major role for van de Beek in 2019. What about that glorious victory in Estadio Santiago Bernabéu? In the 1/8 finals of the Champions League, the ‘Royals’ got a beating from Ajax in their own house (1-4).

In the summer that followed, Van de Beek was also involved with Real Madrid in a different way. Spanish media knew for sure: Van de Beek would move to the team of trainer Zinedine Zidane.

Can you take us back to the moment you won? A day later you come home, what do you think at such a moment?
“Shortly after the victory, I didn’t fully realise it yet. Sure, I was happy but I only realised we beat some really big clubs in the Summer. When I was on holiday and doing nothing. On my beach bed. Then you sit down and think. You play it all back again. You’re with your friends and those guys have experienced it all in a different way. You talk to them about it, too. And then you think: we achieved something great.”

How come it didn’t get through to you until so late?
“We had to move on so quickly. We couldn’t drop any points in the league either, so if we’d had a European game, you’d be back with your thoughts on the next game very soon. You’re being lived. It went on so fast that you didn’t really have time to think about it. My friends made me think about certain actions in games or goals I’d made.”

And then interest in you came, from Real of all clubs. What is it like to read it in the papers again and again?
“I can’t say much about those rumors. I don’t want to, either. They’re things you don’t really want to deal with. You know it’s part of the deal. You don’t have a say in them. There’s nothing you can do about it. Anyone can write what they want, that’s the time now. It’s very bad now.”

Did you speak about it with Frenkie de Jong or Matthijs de Ligt?
“Yes, but only briefly. They had already left at that point and I only saw them at the national team. You’re just not in control. Only a few days ago there was another article that I’m going to Real Madrid. Then you get another hundred questions. I’m not leaving until everything feels right.”

When Van de Beek sees what the third subject is about, he starts smiling a little. The Dutch were unable to qualify for both the European Championships 2016 and 2018.

The arrival of national coach Ronald Koeman changed a lot. Van de Beek became a certainty in the selection and the Dutch Team climbed back to the top. The final of the Nations League was reached and in qualifying, a resounding victory in and against Germany was booked (2-4). Still, there is a small side note: Van de Beek is not yet a starting player in the team of Koeman.

How do you look at your own position within the Dutch national team?
“I’m still growing in that. If I get the chance, I have to show it myself that I can be of value. But I think I can do a lot more than I’m showing now.”
Van de Beek is being watched closely by national coach Koeman ANP.

What does he say to you?
“He has a lot of faith in me. He’s said that to me before. Yes, but anyway, what do I have to say about it? If I get minutes, I just have to show it. I think I can do a lot more in those moments.”

Can you tell me what, for instance?
“That’s tricky, but I haven’t always shown the qualities that I show at Ajax. I’m just trying to do my best to get them out in the NT. I have to become more important. I’m still working on that process”.

The European Championships are coming up. You’re part of the new generation, which has given Orange hope again after two failed campaigns.
“I was just there at the end, but I didn’t play any games in that period. But it’s nice to see how big steps we have made. If you compare it to then.”

Did you also notice that the togetherness in that period was a little less?
“They were all good guys, too. I’ve only been on the previous selection once, so it’s hard to judge. But what I can say is that the team has grown a lot. I know, I’ve seen that for myself. We’ve made a big step together. It’s special to experience. When you see how this team fights for and with each other, that’s really nice to see.”