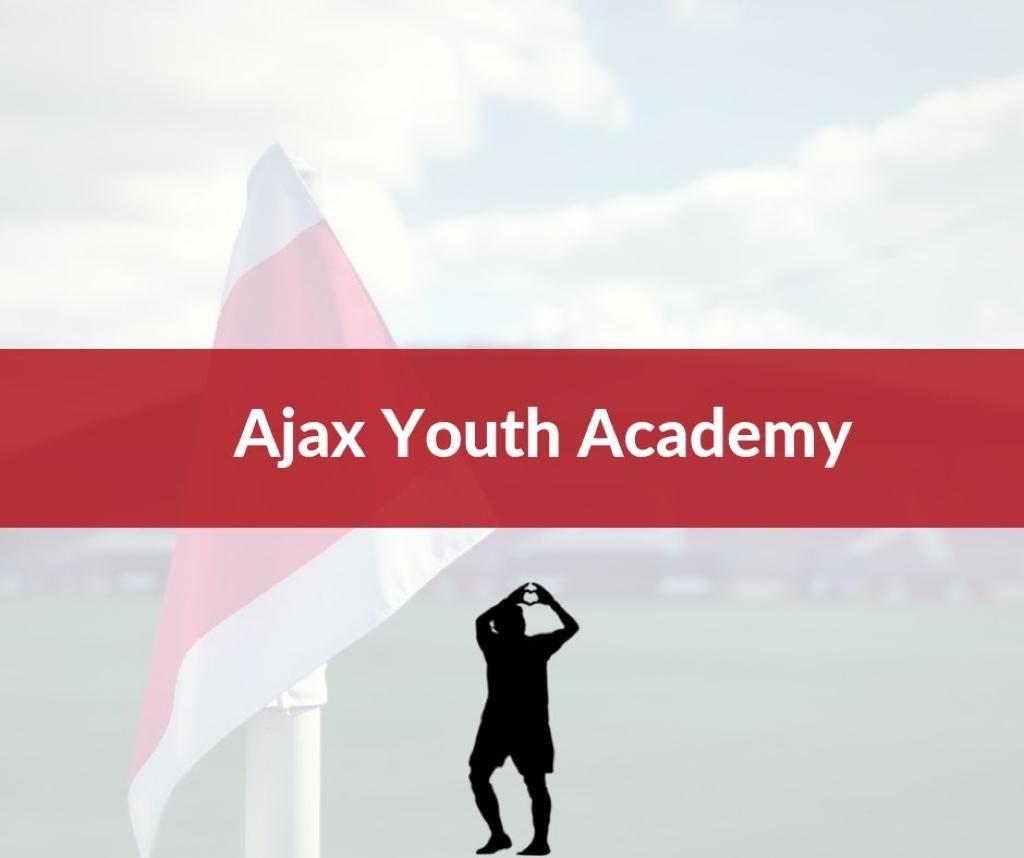 Digital and social media play an increasingly large role in the world of modern football. Platforms like Twitter provide the easiest way for clubs to communicate with their fans and vice versa. The community of Ajax supporters is well-represented on Twitter, and there are many pages dedicated especially to news, commentary, and celebration around the club. Some of the people behind these pages tweet exclusively in English, connecting to the international fan base in the same way we do at All About Ajax. So we reached out to some of the biggest Ajax-related accounts on Twitter, which are being managed from all over the globe, to ask them a few questions about their page and their support for Ajax.

Ajax have always prided themselves on having one of the all-time best football academies in the world. It’s only fitting that some extra love and attention goes out from the Ajax fan base to the youth teams and players. This is reflected on Twitter, of course. While most of the twitterers we’ve connected with through this column cover Ajax Amsterdam as a whole while focusing on the first team, the people of @AjaxYA are totally fixed on the youth academy. We had a chat with Jelmer Jager, who represents a group of five that runs what is arguably the best Twitter account to keep you up to date on what’s happening at Sportpark De Toekomst. They are @JelmerJager, @RoyWolterx, @MeesOomens, @RikL31 and @Zlajan.

I have thought about this a lot, but I actually don’t know the answer. My brother and I have been fans of the club for as long as we can remember. We were watching highlights and listening to matches on the radio when we were just 7 or 8 years old. That was around 2003/2004.

Q: How did you develop such a big interest in the youth academy specifically?

When I was young, I saw so many players coming from “the academy”, as the commentators said. Around this time I also discovered how many big players of big clubs once came from our youth academy. I was impressed by it and started to follow the youth teams more closely as the years went by. I once visited Sportpark De Toekomst and saw Ajax U15 play with Abdelhak Nouri and Donny van de Beek. Ever since that moment I’ve been following the academy teams closely.

Q: Who do you enjoy watching and following the most, the first team or the youth?

Q: Have you ever met or come into contact with any of the Ajax prospects?

Yeah, we have a lot of contact with talents. Personally as well, when I was following the U15’s in 2011-2012. I started to get in touch with a few of them and we still have good contact weekly or daily.

I was writing for Ajax1.nl and followed the academy closely. I got in good contact with Roy and Mees on Twitter and we talked a lot about the academy and individual talents. I also got a lot of DM’s from foreign Twitter accounts with questions about the academy. What were the results? What are good prospects? Who are the topscorers? etc.

Because of the lack of information for foreign supporters, we thought: why do we not start an account? We knew a lot about the academy (not as much as now, of course), but were mostly just very interested in Ajax and youth football. There also weren’t a lot of accounts on which academy football was mentioned, highlighted or on which talents were appreciated for their hard work. So we started the account and in no time we reached 1K followers. Now we have 11K+ followers, which is insane! The most beautiful thing is the number of interactions we get with our followers in our DM’s. It’s great to share our love and knowledge about the Ajax academy. Another beautiful thing is the good contact we have with a lot of talents from all of the teams.

We post a lot of different kinds of tweets. But what worked best for us was consistent content at the start. We started a few years back with our series ‘One to Watch’, which is still running. It’s a great way to highlight a youngster who did great that week. All of our own content and statistics we collect ourselves, including the news and articles (Past of The Future). We know about a lot of rumors and ‘breaking’ news, but we don’t want to post anything until it’s official because of how many followers we have now.

Q: What is your opinion on Ajax’ own approach to social media? Could they make improvements? Do you offer a kind of content that the official Ajax accounts lack?

Ajax is doing a great job on the socials. I think everyone can always make improvements. Maybe they could use more interaction. Something that is requested a lot, especially by the younger followers, is more online live streams of youth matches. We don’t believe Ajax’ account really lacks content about the academy though.

Q: Ajax gained a lot of followers across the borders after last season’s Champions League run. Is this effect noticeable to you in your work?

We gained a lot of followers as well. But also a lot of questions and more interest in the academy and talents overall.

Q: Could you point out an Ajax youth team that is really exciting at the moment, but goes unnoticed by most fans?

We generally think in terms of generations rather than teams. A lot of talents get promoted by Ajax to higher teams when they are ready for a new challenge or to take new steps in their development. I would say that the 2001-2003 generation is great. Those players are knocking on the door of the U21’s and the first team now. They have impressed over the years and are making great steps towards the first team!

If we had to pick a specific team we would go for Ajax U15. They are – at the moment of typing this answer at the end of January – unbeaten so far this season. They drew three matches and won every other match so far this season. We posted about the U15’s as well, so hopefully, it hasn’t gone totally unnoticed, haha!

Q: Do you think Jong Ajax can win the Keuken Kampioen Divisie?

To be honest, we really don’t care about Jong Ajax’ ranking. It is a development team where talents can play against physically stronger opponents or get used to the first team playstyle. Frenkie de Jong, Abdelhak Nouri, Donny van de Beek and nowadays Ryan Gravenberch, Jurriën Timber and Juan Familia Castillo have learned or are still learning so much playing for Jong Ajax. Gravenberch is ready for the first team now, we are pretty sure about that. He will seize his opportunity. Juan Familia Castillo came back from Chelsea and had a few difficult weeks at the start of the season, but he is now a fantastic fit in the team. Hopefully, Ajax will trigger his release clause at the end of this season.

But to answer the question: yeah, they can win the KKD. The problem is that the team will lose a couple of key players to the first team during the next few months. Some big talents from the U19’s will be taking their places, like Naci Ünüvar, Sontje Hansen and Anass Salah-Eddine. It looks like it will be a very interesting second half of the season. It would be a huge achievement if they manage to win it in the end. Especially with the heavy competition from Cambuur, Volendam, De Graafschap and NAC Breda.

Q: Is it too early to label guys like Ünüvar and Gravenberch future stars of football, or is it justified?

It is justified! They both have been impressive for many years now. Matthijs de Ligt was also rapidly promoted from the one youth team to the next, and every time he got used to a higher level so quickly. It has been the same for Gravenberch, though he needed a longer time to develop in the U21’s. There is nothing wrong with that for a 16-, now a 17-year-old talent, of course. The same thing could happen to Ünüvar. The most important thing for players their age is just to play a lot of matches. They are working so hard to realize their dreams. They are both blessed with great talent on top of that. They will reach the top, for sure!

Q: Now that Naci Ünüvar has made his debut, which next player debut are you looking forward to the most?

We look forward to seeing Naci (and other talents) now develop further in the U21’s. In our opinion, Jurriën Timber and Juan Familia Castillo deserve their first-team debut, based on their performances in Jong Ajax. Other talents we are looking forward to are Kenneth Taylor (midfielder), Anass Salah-Eddine (left-back), Brian Brobbey (striker), Neraysho Kasanwirjo (center-back), Devyne Rensch (center-back) and Youri Regeer (midfielder).

Q: A lot of young talents leave the Ajax academy before making their debut, but whose departure did you find most disappointing? Who is “the one that got away”?

Luckily, Ajax changed their policy around this issue. It used to be the case that youth players would only get a contract when they turned 18 years old. This costed us a few talents. We think the transfer moves of Timothy Fosu-Mensah, Juan Familia Castillo and Daishawn Redan were most disappointing. Of course, it’s difficult to say what would have happened if they had stayed. We are at least happy that Castillo is back now. Hopefully, Ajax will sign him at the end of the season. His defensive skills have developed very well in London, so that’s something positive.

Q: What are your expectations of Ajax this season in the Eredivisie and the Europa League?

I’m carefully optimistic. Hopefully, we can get our form of October/November 2019 back and the injured players can rejoin the team quite quickly. If that happens, I’m sure we will enjoy Ajax a lot again this year! In the Europa League you don’t want to look too far ahead. Take it one opponent at a time and see what a possible draw will bring. Getafe could be a very difficult tie, but hopefully, we can prove ourselves once again in Europe.

Q: Who is your favorite player of Ajax’ current team?

Q: If you could pick any Ajax youth player this season (U15-U21), what would your perfect Ajax line-up look like?