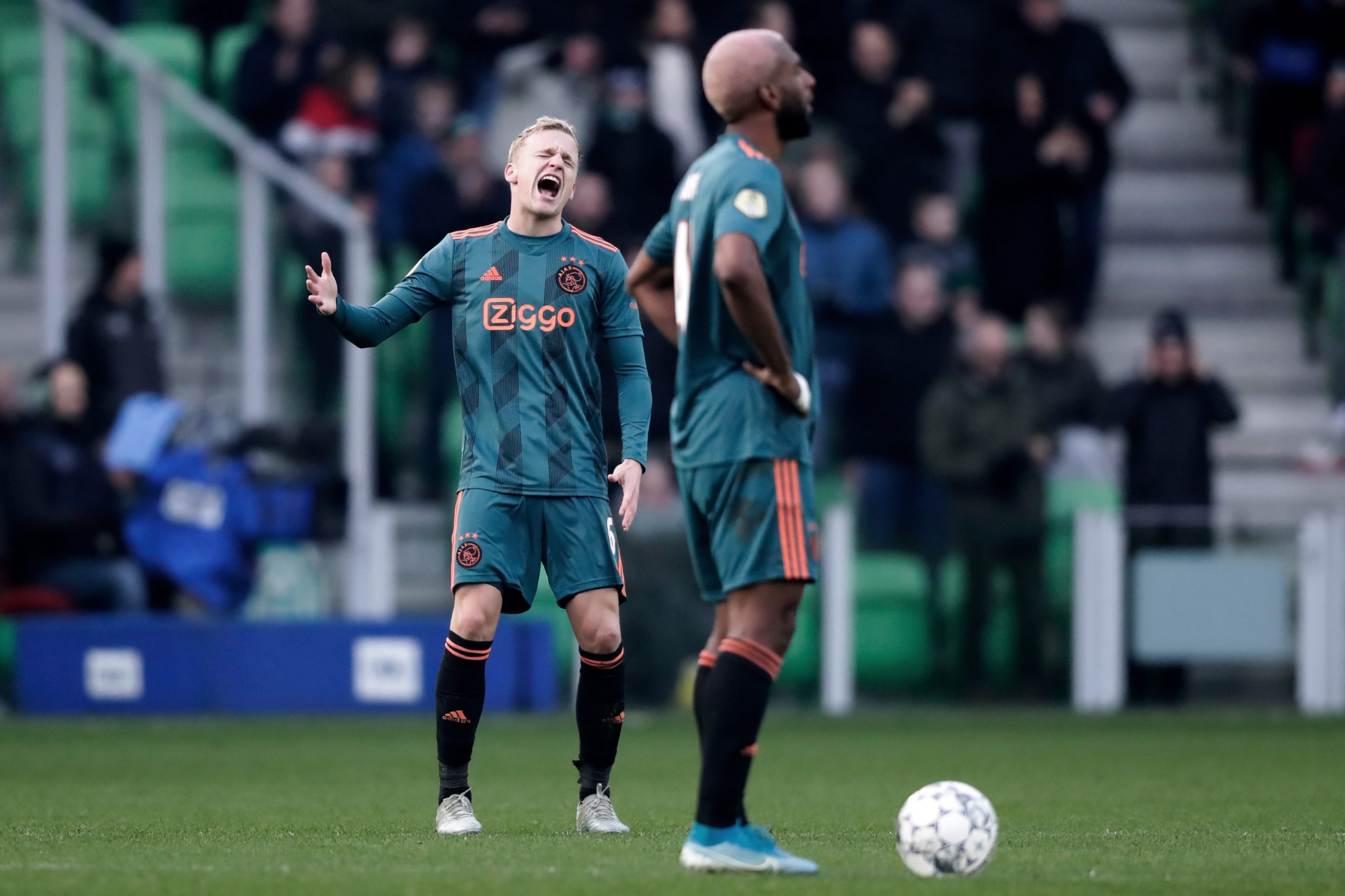 On a frustrating afternoon up in the north of the Netherlands, Ajax lost the traditionally difficult away game to FC Groningen. Ajax had managed to score a late winner in last year’s edition of this fixture, but they were less successful on this occasion. The loss of Blind’s and Ziyech’s passing prowess was painfully noticeable on the pitch, as Ajax struggled to dismantle the fortified Groningen defense. The first hour of football was simply Ajax-unworthy, and there was not enough time on the clock to repair the damage once Ajax had woken up. FC Groningen 2 – 1 Ajax.

Additional injuries popped up just prior to kick-off, as if the Ajax sick bay wasn’t full to the brim already. André Onana suffered from a pain in his shoulder that Erik ten Hag did not want to take any risks with. He was dismissed and replaced by Bruno Varela: the first goalkeeper to step in for Onana in the Eredivisie since more than a year. Noussaïr Mazraoui was also deemed unfit to start, so Sergiño Dest played in his stead. Siem de Jong and Ryan Gravenberch were both part of the midfield. Kaj Sierhuis, an Ajax loanee, started as Groningen’s striker.

The first touch of the ball was a shot on goal by Dušan Tadić. He tested Sergio Padt from the center spot, but the goalkeeper could not be surprised. This was Ajax’ only shot on target over the course of the entire first half. FC Groningen, who currently sit on the 8th spot of the table, barely concede a goal at home, and Ajax soon found out that the northerners’ defense is indeed a tough nut to crack. Though the hosts did not dominate the match or even keep hold of the ball for extended periods of time, they excelled in physical duels and work rate.

Ajax tried to do what they always do when their opponents dig themselves in on their own half: surround and lay siege. There was not much of a siege, however, as nobody in the starting line-up seemed to be able to send those splitting passes or clever crosses. The theme of the first half was ‘loss of possession’, and Ryan Gravenberch was the unlucky protagonist. Ajax were missing their magician and their vice-captain. The home side was looking a lot more comfortable on the ball, and they utilized all the space Ajax provided them with when they scored the opening goal in the 16th minute.

FC Groningen had been waiting patiently for an opportunity, and they scored immediately when the first one appeared. Django Warmerdam, who also has a history with Ajax, spotted Sierhuis making a run through the center and supplied him with a through pass. Sierhuis only just managed to get the ball past Varela, who arguably could have done more to prevent that from happening. Varela was looking a lot better when he denied Kaj Sierhuis his second goal of the game, though the defense as a whole looked like a mess.

Ajax allowed their opponents a few more chances to score in the first half, but they reached half-time with ‘just’ a one-goal deficit. The match could actually have been tied, had Ryan Babel been able to score a simple tap-in on the one occasion that Ajax managed to penetrate the defense. Sergiño Dest reached the back-line with a good run, but his low cross passed through the legs of Ryan Babel rather than the posts of the goal. Dest was arguably the only Ajacied who was on top of his game.

Whatever the manager told the players during half-time, it did not help. Ajax were just as clueless, Groningen were just as ruthless. The hosts doubled their lead in the 52nd minute. Lundqvist messed up his shot from a good position, but his harmlessly weak effort took a deflection off Martínez and left Varela no chance anyway. It was a lucky goal, but Ajax could only blame themselves. Ten Hag let his men wander aimlessly around the field for a while before making two substitutions around the hour-mark. Traoré and Eiting replaced De Jong and Gravenberch.

It could have been because of these substitutions, or because Ajax finally woke up, or because Groningen finally grew tired, but the match started to change after that moment. Babel had two good efforts on goal and Eiting’s shot from distance only just went over the bar. Ajax finally bagged a goal in the 72nd minute. Donny van de Beek buried the ball in the lower left corner after good preparatory work by Martínez and Tadić. Ajax was now chasing an equalizer with renewed energy.

Hoping for a repeat of last year’s escape, Erik Ten Hag let Huntelaar make an appearance in the last ten minutes of the match. The 36-year-old pinchhitter would not be Ajax’ talisman this time, however. Despite a handful of chances in the final stages, Ajax still lost in Groningen. It is a logical result of a very poor overall performance. Ajax need to go back to the drawing board to find out how to make this team work without all those missing players. There are a lot of large hurdles ahead, and a lot more could be lost if the puzzle pieces don’t fall into place soon.